Mental Illness is not a Myth—and Human Genomics
Proves It

The DRD2 Gene and Dopamine

“An exact determination of the laws of heredity will probably work more change in man’s outlook on the world, and in his power over nature, than any other advance in natural knowledge that can be foreseen.”

“DNA+Evironment+Triggers+Chance = Your Future Health.
Heal Mania, Bipolar Depression, and Schizophrenia more effectively with a simple cheek swab that tests for the DRD2 gene."

Dear reader, I’ve been in psychiatric practice for about four decades—and with the diverse range of patients I see on a day to day basis, it’s not a stretch to say I’ve experienced a meaningful cross section of worldviews, philosophies, and belief systems held by those of us living in America today (and even more so treating those who live in the global melting pot that is Washington, DC.) With that in mind, I want to start our discussion today with one of the most common myths my patients have held close over the years: “A part of me still feels that my mental condition isn’t really ‘real,’ that it’s something I created, or a failure of willpower.” Another version that comes up with my older patients—especially those who have entered the therapeutic process more stubbornly than most—“Back in my day, we called ‘depression’ just being ‘sad’. Something to ‘get over’.” Substitute any number of commonly held misconceptions regarding mood or brain disorders such as depression, and you’ll get the idea: “’anxiety’ was just what we all felt when we were busy.’” If it wasn’t the patient directly believing these myths, it was their fathers, or their mothers—shaming them for feeling different, and leading them to question if their illness really was “all in their heads” after all.

These are hard myths to live with when one is ill. It’s difficult enough for individuals who are suffering from a mental illness to cope—but when they or those they love don’t even believe the illness they suffer from is “real”, their problems are compounded by a factor of ten, if not more. Their despair heightens, aloneness deepens, shame becomes overwhelming. Now, reader: today we live in a world bound by the scientific method. As W. Edwards Demming once said, “In God we trust: all others must bring data.” What this translates to in practice is a need—outside of a few political topics—to see the evidence, the hard facts, the tangible details. And what so many do not realize about mental illness is: the evidence is right here in our bodies, waiting for us. And it’s all accessible through a simple cheek swab.

Mental illnesses can often be attributed to a number of different genetic factors. If a patient undergoes a genetic test under the care of a doctor who knows what to do with the findings, those genetic factors can be assessed and may possibly be mitigated with precision care—something my own practice prioritizes. But the difficulty treating illnesses like anxiety or depression without the help of a genetic test unfortunately perpetuates the myth that there’s no “hard proof” that these disorders truly exist. But there are two particular illnesses that—if people knew about its underlying mechanics—would put that argument to rest once and for all. And that’s the illness we’re going to focus on today—as well as the gene responsible for it. Today, we’re talking about bipolar disorder and schizophrenia, and their direct relationship with the DRD2 Gene. And to do that, we’re going to step into the “genetic kitchen” and take a nice assessment at the tools our body does—or does not—have at our disposal.

The Colander vs the Cheesecloth: An Introduction to the DRD2 Gene and its Variants

From OPRM1 to COMT, a good portion of the genes we’ve covered thus far in our DNA series have dealt with—either directly or peripherally—the neurotransmitter known as Dopamine. Based on what we learned last week, this makes sense. Dopamine plays a big role in regulating our moods and our behaviors. As we also learned last week, it even plays a role in how we manage stress. A body and mind with high levels of dopamine is measurably different than a body and mind with lower levels, and gene tests have proven this out in innumerable patients who come to Potomac Psychiatry for help. But while many genes affect the production and breakdown of dopamine in one way or another, the mechanisms behind those genes can look drastically different. And the simplicity behind today’s gene, DRD2 is one of the most salient examples of how genes can transform who we are, and how medication can help us optimize our DNA to transform our futures. 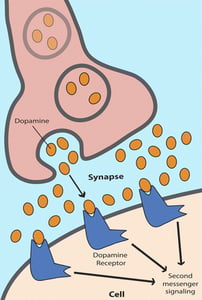 Here’s where our kitchen tools come in. Our DRD2 gene determines, among other things, how many of those receptors our neurons are equipped with—which in turn determines how much or how little dopamine affects the operation of our brain cells, circuits and systems. How much of it triggers the “second messenger systems” (above) inside the brain cells that affect many cellular functions. Think of it this way: If you are born with a certain DRD2 variant, your receptors might act like a colander, offering many easy pathways for the dopamine to slip right through to the neuron. Like water from a pot draining right through the holes of a colander, dopamine pours into your system easily and quickly. Or, you could be born at the opposite end of the DRD2 spectrum. If that’s the case, your receptors may be few and far between—meaning that dopamine sifts through at a much slower rate. The opposite of a colander, a cheesecloth is meant to drain water at what can feel like a glacial pace. You get the idea: with less holes to pour through your system will inevitably see less dopamine.

The DRD2 Gene, Bipolar Disorder, Mania and Schizophrenia: Why DRD2 Genetic Testing is a Must

Dopamine is a pleasure chemical: in normal levels, it brings us joy and euphoria. But there can be too much of a good thing. Too much dopamine can lead to agitation, mania, insomnia, and more. And if your DRD2 gene creates dopamine receptors that look more like a colander than a cheesecloth, then you may be more likely to suffer from bipolar disorder (mania) or schizophrenia.

For all of you readers who began this blog looking for a short and sweet take-home message to deliver to those who still believe that mental illness is a myth, here’s your slam dunk: schizophrenia and mania are so unambiguously linked to the DRD2 gene that every single antipsychotic drug on the market targets the receptor coded by this one key piece of your DNA. And these medications help millions of patients every year get a handle on their daily lives. Mental illness, in other words, isn’t something we can wish away. It rests in our genes—and now, we finally have the power to do something about it.

If schizophrenic or manic patients have receptors like a colander, then antipsychotic medication is like strategically placing a hand towel into the colander to block some of its holes from allowing water out. These meds, in other words, block many receptors that dopamine binds to thereby restoring some balance to our neurochemical makeup. Antipsychotics working with DRD2 are especially effective blocking some of the positive symptoms of schizophrenic behavior—like hallucinations or delusions, and help to bring manic patients down to a more level mood.

As my colleague Dr. Guillermo Portillo explains, “The key to effectively treating certain mental illnesses with medications that block dopamine receptors is limiting the blockade to no more than 80% of the receptors.  By sequencing the gene for DRD2 and combining the genetic test results with an understanding of the potency (power) with which each of these medications blocks the dopamine receptor, we can better tailor treatment in two ways.  The first is by more accurately gauging the lowest effective dose, and the second is by selecting a medication in this family with the lowest effective potency.  Using the lowest amount of the least powerful, but still effective medicine, is the key to avoiding both short-term and long-term adverse effects and achieving the best outcomes.”

We know what happens if you have too many dopamine receptors—but having too few causes another sort of problem. Many studies have shown the correlation between low dopamine levels and increased risk of addiction. Intuitively, this makes sense. If dopamine is the “joy” chemical and you don’t have enough of it, drugs that make you feel euphoric can seem dangerously compelling. Opioids synthetically heighten our levels of dopamine and other feel-good neurotransmitters. But they also leave us high and dry once the drug wears off. Genetic testing may help to determine if you may be more susceptible to addiction. Tests like Genomind’s Genecept Assay allow you to take control of your future health by enabling you to implement prophylactic measures to improve your mental and emotional wellbeing. 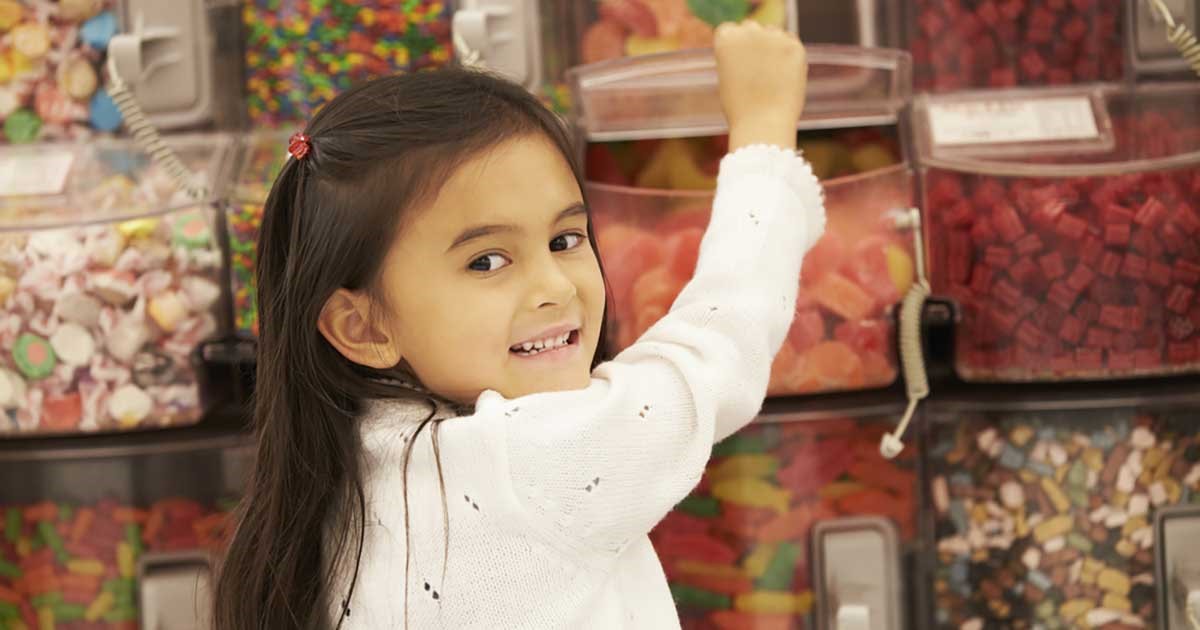 Finding the Sweet spot with DRD2…

Hey SMARTIES, it’s your pal GENiE here again and I feel “like a Kid in a Candy store” sharing with you another extremely exciting gene, DRD2. In your body, DRD2 builds a doorway for a WHOPPER of a chemical called Dopamine (pronounced dope-ah-mean). When Dopamine crosses through DRD2, it lets your brain know when you feel pleasure. (Just think of the MOUNDS of joy that you get from that first bite of your favorite candy bar – that’s Dopamine at work)

Just like a kid in a candy store there is such a thing as too much of a good thing. Some kids are naturally born with Dopamine receptors that are GOOD & PLENTY and others only have a few. For certain people who are at risk for getting sick, too much or too little Dopamine can lead to a ROCKY ROAD. If you happen to be one of these people and you are feeling in PIECES, the best way to avoid potential side effects from medications, BAR NONE is to TAKE 5 and get genetic testing through Genomind (In my experience, it can be a real LIFESAVER). This small investment can turn out to be a huge PAYDAY for your well-being.

DRD2, Dopamine, and Why it All Matters

Reader, mental illness is real—and a better understanding of its causes and treatments are right there in our genetic code. A disease like bipolar disorder or schizophrenia is so written into that code that rates of hereditability are markedly high. I encourage you: Take control of your own body’s DNA data and learn how to use it to Determine Your Destiny. Take a genetic test and determine what you can do differently right now to live your life how you want to—not how your genetic code dictates you must.