ADHD in the Age of Distraction

The Tricky Genetics behind ADHD and ADRA2A

“Progress in science depends on new techniques, new discoveries and new ideas, probably in that order.”

“DNA+Evironment+Triggers+Chance = Your Biological Destiny. Prevent and heal overweight and obesity more effectively with a simple cheek swab that tests for the 5HT2C gene and MC4R gene.”

Reader, graduation season is upon us! High school seniors are throwing their farewell parties and beginning to say goodbye to old friends, while college students are sweating over their final exams—perhaps to head home after the semester wraps, or perhaps to enter the workforce with a diploma under their belts. In honor of those young adults and their achievements, it seems only fitting to begin this week’s blog—one that fits firmly in the realm of the classroom—with a math problem.  Now stay with me here… this word problem’s an easy one to solve. Imagine you have a closet with four shirts and ten pairs of pants. How many outfit combinations can you wear? Simple: four times ten is a full 40 outfit combinations—enough to last you for a month and some change. Not bad! Now, it’s time for you to play psychiatrist, so how about this one? You have three medication options and four possible brain cell receptor sites those medications are supposed to target. Oh—but you also have, let’s say, at least 100 possible dosage options for those medications, and several genes that determine the biological characteristics of those four receptor sites, that could be analyzed to enable the receptors to be targeted more precisely. Confused? Here is a “simple” picture that begins to depict what I’m talking about (and it’s okay if you now exclaim “Oy!” ): 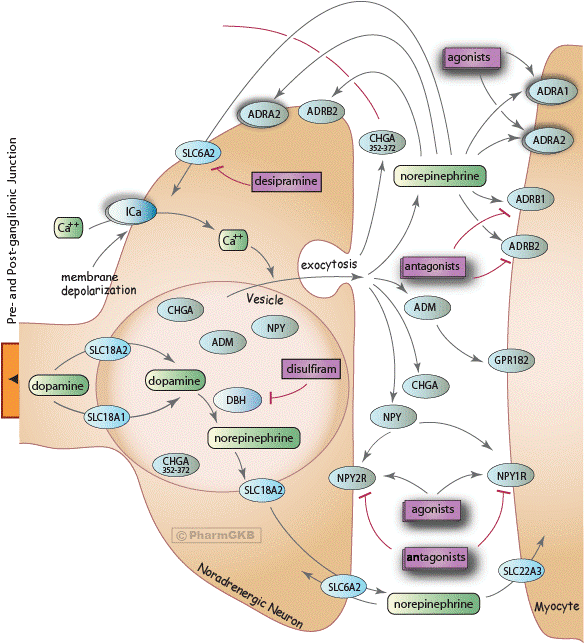 Reader, if you’re still trying to map out this challenge right now, you’ve begun to realize how complicated it’s gotten. The answer does not neatly appear within the charts of some multiplication tables.  Lines can’t be easily drawn between here and there—instead, this word problem seems more like a tangle of yarn. We know there’s a solution, but untangling the mess is going to take an awful lot of brainpower.

Last week, we talked about a gene that looks a lot more like the first word problem: the DRD2 gene codes for the D2 receptor that is targeted by medications treating bipolar disorder, schizophrenia, and certain kinds of treatment resistant depression. Simple concept, right? Four times ten is 40, simple as that. This week, however, we’re dealing with an illness that is notorious for its myriad moving parts. In fact, it’s been called the most over-diagnosed and underdiagnosed disease in America. School-related, difficult to diagnose—if you haven’t guessed it already, we’re going to discuss Attention Deficit Hyperactivity Disorder—ADHD—and one of the genes behind its cause and solution: ADRA2A. Now, let’s explain that tormenting tangle!

ADHD: A Brief Overview and How Genetic Testing Can Help

Here’s a universal truth I’ve observed in my practice: We humans fear what we don’t understand. And among all of the mental conditions that may afflict us or our children over our lifetimes, ADHD is most certainly one of the most poorly understood. I’ve met with many parents of young children who are embarrassed to admit that they fear their child has ADHD. They worry about the stigma attached. They aren’t quite sure what it means—and they certainly aren’t sure of how to fix it. The words they know, they grab onto with high anxiety: forgetfulness, inattention, impulsivity, hyperactivity. No parent wants these for their child, and I empathize with their fear. And patients who suffer from it not infrequently refer to it as “a Curse.”

It’s complicated, and as they raise their concerns, I do my best to provide evidence-based answers. ADHD, on is a highly decentralized disorder, with multiple possible brain circuits involved. We know one thing for certain—ADHD is partially characterized by a deficiency in certain neurotransmitters, namely dopamine and norepinephrine, in a number of brain circuits and systems. And that deficiency may take place in at least four known systems in our brains, each intertwined, but each leading to a different behavioral outcome. Those four places are our basal ganglia, responsible for one of the communication systems within our brain; the reticular activating system, responsible for the communication between different regions of our brain to produce consciousness; our limbic system, responsible for emotional regulation; and our pre-frontal cortex, the CEO of our brain, responsible for executive functioning, attention, and organization—among many other important functions. The deficits in our dopamine and norepinephrine neurotransmitters may afflict any one of these systems, which is just one of the ways in which an ADHD diagnosis almost inevitably leads to intervening with medication and other treatment options. If you are unsure of where the problem lies, it can be difficult to treat with precision.

Patients with ADHD share a number of characteristics, yet at the same time it is a highly individualized disease—how it manifests itself in you may well be different in a number of respects from another patient. And for that reason, optimal treatment requires the very thing that can be difficult to discern: precision. Genetic testing—especially ADRA2A genetic testing—can help to pinpoint strategies to help solve this illness, this “Curse.”

ADHD can feel like a muddled illness.  But as I mentioned before, what we know for sure is that a core attribute lies in a deficiency of dopamine and norepinephrine. It makes sense, then, that treatment revolves around increasing those neurotransmitters in our brains. From a medical standpoint, there are three ways to go about this: increase the brain’s ability to manufacture these neurotransmitters, block their reuptake by the neuron that has manufactured and released them into the synapse, or making it more difficult for enzymes in the brain to break them down before they’re fully utilized by the systems that need them most. Another math puzzle for you: Three mechanisms would equal how many treatment options? It seems intuitive to say three—but in fact, the answer is ”many.” Here’s why.

There are, indeed, two main types of medications used to treat ADHD: Stimulants and Nonstimulants. Each of those is a treatment option. Another option is to manufacture more dopamine and norepinephrine if there is an MTHFR deficiency. Yet another is to treat COMT excess with certain foods and supplements. Still another is to increase BDNF with exercise. Another option for treatment would be a mix of two or more of these interventions. Stimulants are drugs you’ve likely heard of before: Ritalin, Adderall—these both increase the number of dopamine and norepinephrine neurotransmitters at our brain’s disposal at any given time, thereby increasing alertness and focus. They are the mainstay of ADHD treatment and enjoy a high response rate in many patients. Nonstimulants, on the other hand, slow the brain’s process of neurotransmitter reuptake—it leads to the same outcome, more dopamine and norepinephrine, but it takes a different path to get there.

So let’s take a moment to get back to that math problem from the beginning: We know now there are multiple treatment options for ADHD: stimulants, nonstimulants, or combinations of the two alone or with other interventions noted above and in prior blogs. We know there are at least four possible systems those medications may target in our brain. We don’t know what dosage or what combination of meds a patient might need—and an even bigger unknown is how many genes, exactly, are responsible for ADHD symptoms. We do know, however, that the ADRA2A gene seems to play a role, for one major reason: It encodes the alpha2 receptors that the nonstimulants are designed to target. Alpha2 receptors are responsible for regulating our bodies’ adrenergic system—the system, in turn, utilizes neurotransmitters like epinephrine (adrenaline) and norepinephrine. If there’s a mutation or variation on our ADRA2A gene, our bodies will react differently to different types of medications. Often, those who have a variation show a reduced response to nonstimulants, so a treatment focused solely on that class of drugs will often fail.

Here’s where genetic testing really comes into play, reader: We may not have all the information about all of the genes that code for ADHD,  but knowing ADRA2A’s role (and then combining it with genes such as MTHFR, COMT, and BDNF!)  makes the choice to go ahead and genetically test an individual a slam dunk. Four times ten offers an easy number to shoot for—but with ADHD having so many different factors at play, the number of possible solutions becomes too great—and troubleshooting medications can be fraught with emotional difficulties. Being able to narrow down those medication options even just a little bit can shave years of trouble off a young person’s life. Finding a solution for them can mean less stigma, better self-esteem, and more productivity.

“Genie I wish for a Motorcycle!!!”

Your wish is granted…  In your body, you have certain chemicals that rev you up throughout the day and keep you on-the-go like a racing motorcycle.  It shouldn’t come as a surprise to you that the secret instructions for building your unique motorcycle is found in your genes.

But just imagine for a second if the instructions were a little off for navigating how to get from here to there on your motorcycle, and for building the Brakes. Sure, you’d still be able to push down on the accelerator and speed through the day, but slowing down would be a little tricky, and you might be more prone to get lost.  That’s exactly the problem that kids with a diagnosis of ADHD (attention-deficit hyperactivity disorder) have.  They are really smart but can have trouble with slowing down and maintaining focus to stay on course – their GPS navigation system can malfunction.

In our body, we have an important gene recipe for allowing us to slow down, and navigate better, called ARDRA2A.  This important gene is involved in a chemical involved in allowing you to put your foot on the brakes and change directions, and navigate your route more effectively, without your motorcycle crashing.  If you are born with certain instructions for ARDRA2A, you are more likely to respond to certain medications that allow you easily press down on the brakes, and know where and when to go straight or turn.  However, if you are born with other blueprints, your brakes are tougher to push, you are more prone to getting lost, and certain medications might be less effective in helping you.

Once again, while you can’t change the instructions you were born with, thanks to Genomind Genetic testing, you can find out exactly what kind of Brake and GPS system instructions you have and use that information to help you and your doctor choose the best course for helping you to travel along the “road of life”…  (And don’t forget that helmet!) 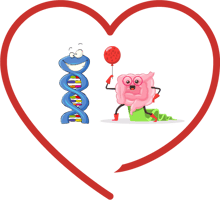 I’ve said it before and I will continue saying it—our personal genomics tells us so much about why we are the way we are. And that knowledge puts the power back in our hands to alter our fate to align with our own hopes, dreams, and desires for our future. Our bodies dictate much of what we think and feel—and with ADHD having such an early onset, this condition can also dictate how we begin to form our very identities.

Genetic testing offers us the opportunity to get to know ourselves on a deeper level, from the inside out. Take control of your fate, reader.