“The gut is the seat of all feeling. Polluting the gut not only cripples your immune system, but also destroys your sense of empathy, the ability to identify with other humans.”

Reader, for the last seven weeks, we’ve taken a deep dive into one of the most promising new fields of study in the scientific world: the microbiome. We’ve learned that the trillions of bacteria impact our mental and physical health in ways we could never have imagined half a century ago. Indeed, these little critters living inside of us have the power to make us stressed out or help us keep our cool; to keep us healthy or to make us sick; to regulate our hormones or throw them into chaotic disarray, at the expense of our mental wellbeing; and so much more. As it turns out, our brains and our gut talk frequently—ideally, they act like the best of friends. Sometimes, however, they can be the worst of enemies. This week, I want to take what we’ve learned and put it into practice to show you exactly how an investigation of our gut microbiome can act as the missing piece of the puzzle in determining why a person becomes—or remains—treatment resistant. This week, I want to share the story of Mia. As you’ll read in the paragraphs below, Mia and her prior doctors were at a complete loss as to why, suddenly, her depression medication stopped working after 25 years. As it turns out, the microbiome and its intricate connection to our body’s immune response, was the ultimate culprit. Thanks to precision psychiatry and various tests, we were able to get to the bottom of Mia’s treatment resistance and prescribe lifestyle changes to help her find her equilibrium once again.

Mia* was 47 and had a 25-year history of depression which, until 18 months ago, had been well controlled by Zoloft (Sertraline). Then, as she put it, “I began to fall apart.” Her depression came back with a vengeance and was unresponsive to her psychiatrist increasing her Zoloft dosage. Her doctor then tried Wellbutrin, Cymbalta, Rexulti and Trintellix—all to no avail. A trial of transcranial magnetic stimulation (TMS) also failed to help her symptoms.

By the time she got in to see me she was in a bad way, afraid of losing her successful career as a real-estate broker and terrified that her husband would abandon her and seek custody of their children. “Dr. Kehr, after 25 years of success with Zoloft, suddenly nothing works anymore to cure my depression. What happened? How can you explain this? What can you do to help me?”

As is often the case with patients like Mia who are treatment-resistant, some underlying contributors had gone undiagnosed—and if you have been reading these blogs (and have become amateur psychiatric sleuths!) you might even be able to list a few possibilities. Here is what stood out in Mia as I took her history of the past 18 months: she had four sinus and ear infections in the past five months, with no past history of these types of infections—and was treated with antibiotics (think immune system compromise and microbiome dysbiosis); she had gained 30 pounds while on Rexulti (think inflammation); she had been under severe job stress to close on some multi-million dollar deals (think chronic stress affecting her fight/flight/freeze HPA axis, which predisposes to dysbiosis); she had been eating more and more carbs to comfort herself (think dysbiosis and inflammation); and finally she complained of chronic fatigue, persistent diarrhea, bloating and gas (dysbiosis strikes again!).

To get to the bottom of Mia’s underlying issues, I administered Genomind’s Professional PGx Express and tests for dysbiosis, leaky gut syndrome, and inflammatory biomarkers. Her genetic test revealed that she would likely respond to medications like sertraline but would need higher than average doses, so we increased hers to 300 mg daily and she partially responded. Her blood tests showed elevations of four inflammatory biomarkers, and her GI tests revealed both dysbiosis and leaky gut syndrome. Not only had her dysbiosis and leaky gut worsened her depression, they also created chronic systemic inflammation, and a weakening of her immune system, which was affecting each and every one of the 32 trillion cells in her body. Arguably, this was causing a “global depression” throughout her body. I worried that she might also be developing an autoimmune disease, where her body’s immune system began to attack her body’s cells (a kind of “cellular civil war” so to speak) further worsening her depression.

Now, let’s take a moment to review the connection between our gut and immunity. As you learned in an earlier blog in our series on the Mighty Moody Microbiome, the gut microbiome plays a significant role in programming our immune system. A healthy, diversified microbiome can stave off chronic inflammation and promote immune homeostasis. However, an unhealthy microbiome—one in a state of dysbiosis—leads to a leaky gut, which in turn allows bacterial fragments, incompletely digested food molecules, and other “foreign bodies” into our bloodstream which triggers our immune response. Consider this: the largest organ of our immune system is our GI tract—and our GI tract happens to be lined with epithelial cells, key drivers of our immune system, which can recognize “invaders” and promote an autoimmune response, or “attack”. Often, as in Mia’s case, that attack leads to chronic inflammation—which in turn leaves both our bodies and our brains in a compromised state, unable to maintain a normal equilibrium. Given that our gut and our brain are in constant communication, it is not hard to see that a weakened immunity in the gut would lead to equally negative consequences in the brain. It’s a terrible cycle—and one that can be difficult to reverse without understanding all the underlying causes.

Luckily, Mia’s test result clarified the missing pieces of the puzzle—and helped us create a precise plan suited for her body’s needs. We placed her on a Mediterranean diet, elimination diet for food sensitivities (her leaky gut had let undigested food molecules into her bloodstream, triggering antibodies to those foods. By eliminating those foods, we would eliminate the antibodies over time), a probiotic and a prebiotic. Initial results are encouraging, as she is beginning to lose weight, gain more energy, and have more normal bowel movements. I now feel that we are on the right path with her—time will tell—and I am hopeful that as her microbiome and immune system improve, and as her chronic inflammation abates, those nasty recurring upper respiratory and ear infections will abate as well, and she will fully recover from her depression. 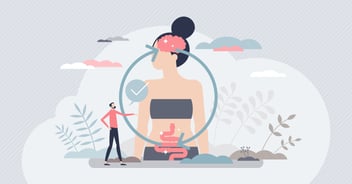