Tick Tock Tick Tock, Can You Reverse Your Biological Clock? Travel Backward in Time to Unwind the

Root Causes of Your Suffering Self

“For what it’s worth: it’s never too late or, in my case, too early to be whoever you want to be. There’s no time limit, stop whenever you want. You can change or stay the same, there are no rules to this thing. We can make the best or the worst of it… I hope you live a life you’re proud of. If you find that you’re not, I hope you have the courage to start all over again.”

Root Cause Psychiatry and The Methylation Time Machine

Dear Reader, what if you could go back in time and reverse what happened to you? What would you choose? Many things come into my mind, about how I could have been a better doctor, friend, father, spouse, colleague—or at a more fundamental cellular level, could have eaten fewer pastries, less ice cream, and… what about all those pizzas? Wouldn’t it be amazing if we could travel back in time and reverse those seemingly minor mistakes that turned out to have a bigger impact than we could’ve imagined at the time… like the negative effects our lifestyle choices have had our cellular health, particularly our brain health? Many of my patients can already feel the adverse effects of aging on their brain… but what if we could wind that clock backwards, rewriting the epigenetic code in our 30 trillion human cells—including our 200 billion brain cells—to get younger and younger, just like Benjamin Button? More “sentient,” as opposed to becoming “senseless” and moving quickly toward “senescence?” This idea might sound like some far-fetched sci-fi movie, but what if I told you that you could begin to rewrite your biological history right now, starting today?

Reader, we may never get the opportunity to time travel back to erase that inconsiderate thing we said to our loved one, or that embarrassing moment we had in college, or any number of regrets in between—but with the right skills, we can travel back in biological time heal our body’s most microscopic cellular wounds. And that’s exactly what we’ll be exploring in this blog.

How Old Am I, Really? Your Biological Age, Explained

To understand how a certain sort of cellular time travel may be possible, we must first introduce the concept of “biological age” as contrasted with “chronological age.” Chronological age relates to the actual amount of time you have been alive—and I’m sorry to say, there’s simply no reversing those cold, hard numbers. Biological age, however, relates to your physiologic, cellular, and genetic age, and it is far more important to your mental and physical health than your chronological age. Perhaps the most robust measure of biological age is the “Epigenetic Clock” (a term coined by Dr. Steve Horvath in 2013), also known as the “Methylation Clock.”

As you read in our last blog, methylation is the epigenetic process by which genes get turned “on” or “off”, by very small molecules known as “methyl groups,” that bind to our DNA. When this “methylation process” goes smoothly, the methyl groups bind to just the right genes, and no others, creating a “methylation pattern” that promotes health and harmony in our cells. Getting this pattern right is crucial to our DNA functioning correctly as the “blueprint” of life. But when our methylation patterns are disrupted, the blueprint becomes damaged, and a whole host of irregularities known as “cellular noise”—resulting in mental and physical illnesses—may emerge. Methylation is life’s master clock winder, and is arguably the most important gene-regulating factor as it is able to produce youthful or senseless-senescent cells in our brains and bodies. And reader—the age of our epigenetic or “methylation” clock can not only reveal incredible information about our bodies (for good or for bad), it may just hold the key to reversing years of unhealthy habits and lifestyle patterns that have kept you from feeling your best for too long.

You see, our epigenetic clock is not bound by chronological time. Rather, it is determined and “set” by the multiple causes and conditions that define our life, and our lifestyle. Certain habits, proclivities, and dispositions can accelerate this aging process, such that while a 30 year old may appear young on the outside, the microscopic components of their being that they unconsciously feed daily create a biological age decades older than their youthful demeanor may suggest. Similarly, a 70 year old may appear to be aging on the outside, but on the inside those microscopic components (your brain cells, your gut cells, your neurons, and so much more) may be enjoying the comparative benefits of young-adulthood! In fact, centenarians possess a better preservation of their methylation status, and on average have a biological age nine years younger than their chronological age.

The tiny molecular mechanisms inside our bodies that determine our biological age are easily ignored—and how very human of us it is to ignore something simply because we can’t see it with our own two eyes! But these processes are the very foundation to good health. If we pay them no mind, they will accelerate our aging process. But if we can understand just the basics of their functioning, we empower ourselves to turn back our own clocks in a powerful way—and in the process, change our mental health outcomes.

What Contributes to Accelerated Biological Aging—and How is my Mental Health Affected?

Many microscopic molecular factors can contribute to accelerated biological aging inside your 30 trillion human cells, from chronic inflammation (“inflammaging”) to telomere shortening (the shortening of the protective caps of your chromosomes where DNA resides)—but epigenetic changes caused by damage to the methylation pattern is a significant contributor. But when your “master clock winder” is stuck in fast-forward, accelerating the movement from sentient to senseless to senescence inside your cells, those cells aren’t the only things to suffer—as more and more studies are showing, your mental health suffers too. Accelerated biological aging is found in serious mental illness.

In prior blogs we discussed the importance of genetic testing to determine one’s personal genome, using tests like Genomind’s Professional PGx to help psychiatrists practice personalized precision psychiatry, and its direct-to-consumer Mental Health Map to enable genetically informed self-help. Both of these tests look for genetic variants of a gene known as MTHFR that cause abnormal methylation of other genes that keep us mentally fit, including the following:

As you can see, brain cell aging and mental health are intricately linked, and methylation of your genes plays a significant role in both. Variants of the MTHFR gene in and of themselves predict abnormal methylation of BDNF, SLC6A4, and COMT, creating higher rates of mental illness that may be otherwise preventable! How? Your biological clock—and adjustments that can be made to it—holds the key.

If you’ve read this far and are feeling scared, worried, or distressed about all the microscopic molecular accelerated aging your body may by experiencing, take heart: now that we’ve described the problem, we can start to dig into how we solve it. The following lifestyle changes and treatments can enable us to time-travel to an earlier, healthier mental state—and Root Cause Psychiatry pieces together how to identify these methylation pattern vulnerabilities, as well as how to properly methylate important mental health-related genes, in a sophisticated treatment plan specific to you and your biological clock.

Another proven method of remethylating your genes is through a product known as Enlyte. In the Methylation Chart below, every atom and molecule colored brown is provided in just the right amounts through Enlyte. This “medical food” provides the critical atoms and molecules (known as coenzymes and cofactors) that your cells need to methylate your genes and restore the health of your DNA blueprint, resulting in improved mental health for many patients with an MTHFR genetic variant. 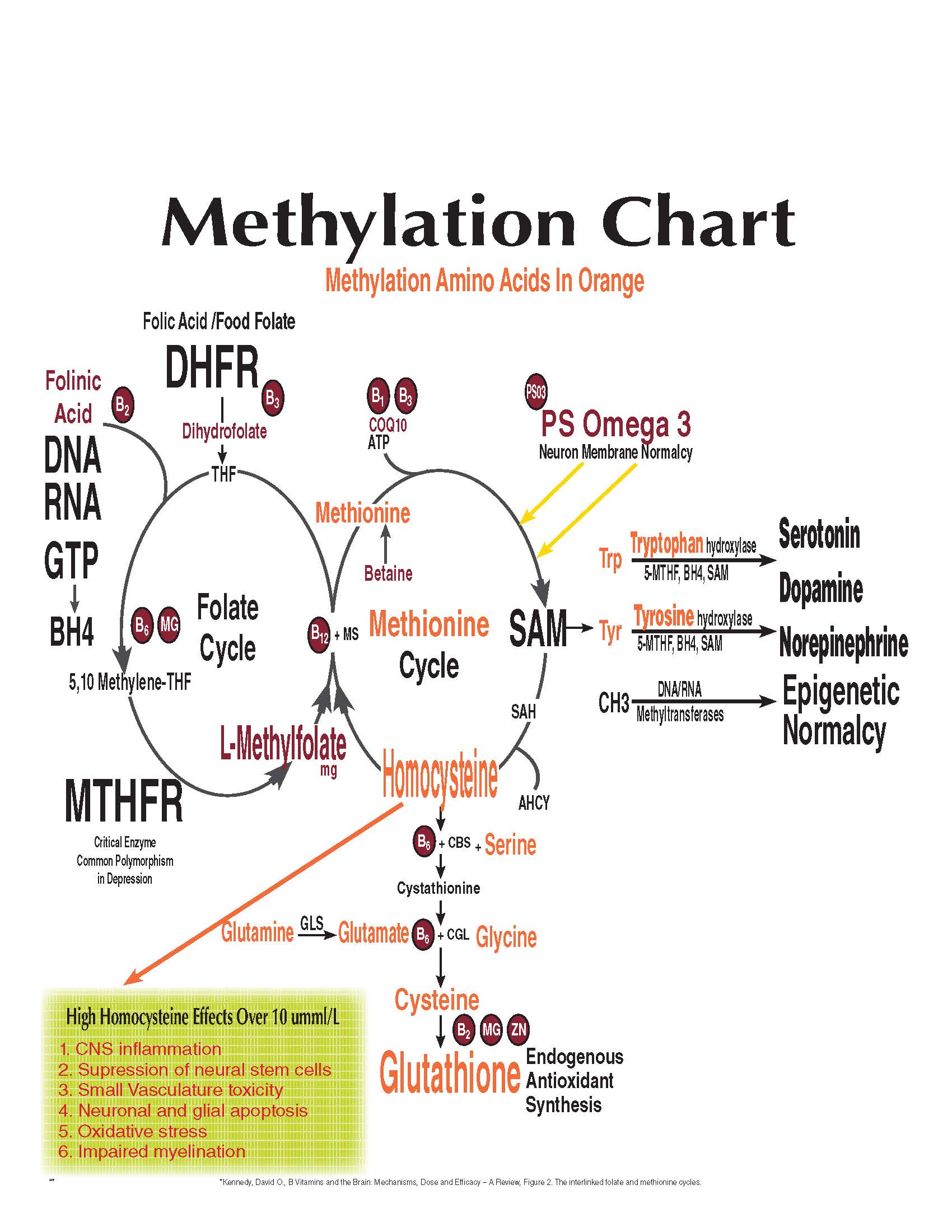 Root Cause Analysis and an Update on Jenny

Remember the story of Jenny from last month’s blog? Jenny had been suffering from depression, a lack of motivation, trouble concentrating, a lack of direction in her career, and trouble coping with a teenage daughter who suffered from bipolar depression. I had diagnosed her with a “double depression”, and we performed a genetic test that found her MTHFR genetic variant, C677T T/T, to be consistent with a 70% reduction in the enzyme it manufactures, which disrupted the normal methylation of her DNA. To treat this genetic variant, I had placed her on Enlyte, and one month later she had happily reported that she was “50–70% better.” We are now two months into her treatment, and she excitedly reported in our last session that she was “90% better” after a second month on Enlyte, and one month on the antidepressant Trintellix, known as a multimodal antidepressant affecting multiple neurotransmitter systems.

While of course the Enlyte and Trintellix were important to her recovery given her genotype and symptoms, her root cause analysis included a suffering self that was also in emotional pain over her daughter’s serious depression. She had obtained a second opinion for her daughter’s care, medications had been revised, and her daughter had begun to improve as well. They began taking walks as the weather had improved, and Jenny’s daughter had begun to open up to her about her own emotional struggles. In my therapy with Jenny, in listening to her deep emotional pain and trauma over the memory of her daughter repeatedly cutting herself, we began to introduce new memories of a daughter on the mend, which hopefully over time will revise and reduce the traumatic memories and update them with happier memories.

Reader: Recall that you are the Lead Architect of restoring the health of those 30 trillion human cells, 100 trillion microbial cells in your microbiome, 200 billion brain cells, and 10,000 trillion synapses that connect them. As your DNA is the blueprint to build better mental health, when it comes to abnormal methylation, the blueprint is damaged and in need of repair—but with Root Cause Psychiatry, doctors and nutritionists can help you identify how the blueprint has been damaged, reverse that biological clock, and begin to restore the well-being of your Suffering Self.

When You’re Not Really Bipolar After All: Anatomy of the Diagnosis of Bipolar Disorder

Which is Healthier – More Sleep or Better Sleep? The Answer May Surprise You

Holy Guacamole! The MTHFR Gene and the Avocado Shortage