Self Esteem, Depression, and Bipolar Disorder

Self esteem regulation is a central problem for all patients with mood disorders, and difficulties with self-esteem can have neurobiological, psychological, social, and existential origins. Let’s explore each of these potential causes under the BioPsychoSocial Model of emotional illness.

Beginning with the biology of mood disorders, normally the DNA in a brain cell codes messenger RNA that then codes what are called “neuroprotective proteins,” that protect the normal structure and function of the brain cells from the negative effects of stress. While there is no “mood disorder gene,” we now know that certain types of repetitive stress such as learned helplessness, defeat stress, substance abuse, and oxidative stress; when experienced by individuals who have a genetic susceptibility to a mood disorder; may cause serious problems in maintaining a stable feeling of self worth. Learned helplessness (“No matter what I do it doesn’t make a difference – I have little or no power in the relationship – I feel helpless and powerless”) and defeat stress (“In the relationship I frequently feel emotionally abused or neglected”) interact with the DNA in the nucleus of the brain cells to cause fundamental changes in the type of messenger RNA and proteins that are coded, such that the neuroprotective protein levels decline, the structure and the function of the brain cells are adversely affected, and self-esteem regulation may be severely impacted. Here is a picture that summarizes how this works: 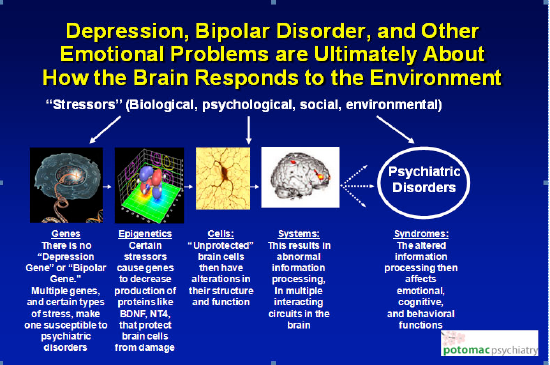 At the top right of the next picture, the unprotected brain cells are shown to have shrinkage of their branching portions, called dendrites, and a decline in the number of chemical transmitters available to make the multiple interacting circuits work. With effective treatments such as medication and psychotherapy, these changes are reversed and normal function is restored as demonstrated at the bottom right of the picture. The treatments restore positive feelings of self-esteem and self worth, or in some instances enable the patient to experience healthy self-regard for the first time in their entire life. 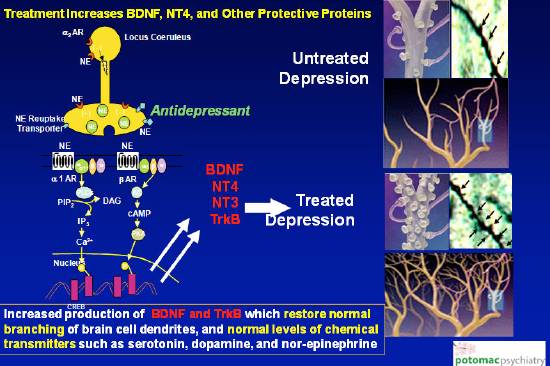 With respect to the psychology of mood disorders, what life events predispose a person to developing low self-esteem as a child, which is then carried over into adulthood? There are many unconscious psychological influences on self esteem that have their origins in childhood, ranging from sibling rivalry, to being raised by a critical or unempathic parent, to suffering from ADHD or other disability, to parental divorce or death, to physical or sexual abuse.

A sibling who is perceived as favored, or more talented and capable, can cause one to feel demoralized and stir up feelings of competitive envy and jealousy, which can undermine the development of self-confidence. The child may feel that no matter how hard they try they simply can’t compete, which creates for them the experience of learned helplessness.

A parent who is excessively critical and demanding, and who lacks compassion and empathy can also predispose the child to feel “not good enough,” even unlovable. This can of course create an emotional environment of defeat stress for the child.

A disability such as ADHD may undermine the feeling of positive self worth. Chronic feelings of frustration and humiliation develop as a result of the struggle to absorb, retain, and effectively work with information presented in class or through reading and homework assignments. Increased conflicts at home may occur due to what is perceived as “not listening” to parents; along with messiness and procrastination. Because fellow students seem to “get it” faster and better, and the child with ADHD frequently misses important social cues, feelings of low self regard can intensify all the more. The pervasive effects of ADHD in a child’s life can create both learned helplessness and defeat stress.

Parental divorce or death, and various forms of abuse, can destroy the “protective envelope” of childhood. These events constitute losses of one form or another, which breach a child’s sense of stability and security, disrupt and disturb feelings of trust, may lead to feelings of guilt and self-blame, and serve to undermine or erode the development of positive self regard. Since the child is helpless to prevent these losses or abuses, learned helplessness stress can bring about the alterations of brain cell activity depicted above.

A number of childhood psychological stressors can predispose the child, adolescent or adult to developing a major mood disorder. What determines whether this becomes a Major Depressive Disorder or Bipolar Disorder? Here is where the genetic contributions play a key role. Most people with major depression do not have close relatives with bipolar disorder, but the relatives of people with bipolar disorder are at increased risk of both major depression and bipolar disorder. With this in mind, what childhood experiences conclusively interact with a genetic predisposition to increase the likelihood of developing a major mood disorder? The answer to this question has the potential to help us prevent the development of a major depressive or bipolar disorder in childhood or later in life.

The interaction of psychological factors with specific family genetics certainly play a role in the development of Major Depressive Disorder. The heritability of major depression is probably 40-50%, and may be higher for severe depression. This means that around 50% of the cause is genetic, and around 50% is unrelated to genes (with contributions by psychological or physical factors).What we don’t know is whether this means that in some cases of depression the tendency to become depressed is almost completely genetic, and in other cases it is not really genetic at all. We do know that severe childhood physical or sexual abuse, childhood emotional and physical neglect, and severe life stress are probably all risk factors. Losing a parent early in life probably also increases risk to some extent.

Psychological factors interacting with family genetics also plays a role in the development of Bipolar Disorder. Studies show a 10 times greater risk of developing bipolar disorder if a first degree relative, such as a parent or sibling, has the disorder, for an overall 8.7% chance. How do we know whether this is from a genetic susceptibility or results from how the child is raised? The answer lies in the fact that there is a much greater chance (around 65%) that identical twins will share the disorder, vs. around a 5% to 20% chance for fraternal twins. Since the figure for identical twins is 65% and not 100% science has determined that certain environmental factors also predispose to the development of Bipolar Disorder; such as sexual abuse, highly critical parents, and low levels of maternal warmth. Substance abuse can also “kindle” abnormal activity in the temporal lobes of the brain, the so-called “seat of emotions,” resulting in a higher likelihood of developing Bipolar Disorder.

Social factors in the immediate or extended family also play a role. Divorce, death of a child or spouse, severe setbacks in ones career, economic reversals, or a child with a physical or mental illness can all contribute to feelings of despair and hopelessness, and engender both defeat and learned helplessness forms of stress. A major mood disorder including severely disrupted self esteem can then ensue. Once again the common theme is the experience of specific types of stress that involve loss, and real or perceived powerlessness to effect a different outcome, that interact with a genetic susceptibility to Major Depression or Bipolar Disorder.

Finally, existential factors can contribute to a diminution of self-esteem. At significant transition points in an individual’s life, one may experience an “existential crisis.” A useful framework for understanding the developmental challenges at each life stage, and the corresponding opportunities for emotional growth, is provided by psychologist Erik Erickson’s Stages of Psychosocial Development. In Erickson’s description of eight life stages, an “identity” or “existential” crisis may develop in stages five through eight, if the developmental challenges of one or more of these stages is not successfully confronted, negotiated and mastered. This may be manifested as an identity crisis in the adolescent or young adult, failure at achieving intimacy and commitment in early adulthood, a career that lacks a sense of accomplishment and social value in middle adulthood, or despair in late life when reminiscence brings regret and a sense of failure.

In “The Psychiatrist as Psychotherapist” I wrote about the psychiatrist’s capacity to integrate a knowledge base comprising neurobiology, general medicine, the unconscious, behavioral science, family systems, workplace/environmental stressors, and nutrition, to design and implement holistic treatment plans. To create positive feelings of self worth for the very first time in a patient’s life, or to restore confidence following the onset of a major depression, or to stabilize wide swings in self esteem in someone suffering from bipolar disorder, necessitates drawing from all of these knowledge bases, and is both a science and an art. Influence is brought to bear at the level of gene expression, brain cell circuit function, the unconscious, family interaction, and existential meaning and purpose.

A psychiatrist is privileged when he or she is able to work with a determined and earnest patient, as they embark upon a journey toward that cherished place – the achievement of stable, positive feelings of self-regard. This cherished place includes an abundance of newly discovered riches: such as the ability to enter into a committed relationship and feel safe; looking at yourself in the mirror and liking what you see; hopeful feelings about the future; an end to comparing yourself to others, and coming up short; no longer being your own harshest critic; and leaving behind those self-sabotaging behaviors that preclude a more joyful experience of self and others. As their work together creates both social value and a great sense of accomplishment, the journey provides one additional benefit – it is exceptionally good for the middle-aged psychiatrist’s own self esteem!

When You’re Not Really Bipolar After All: Anatomy of the Diagnosis of Bipolar Disorder

“Bipolar! I’m not really Bipolar… am I?” How Modifying the Expression of CACNA1C, ANK3, MTHFR, and SLC6A4 Genes Can Help You Recover from Bipolar Depression

Genetic Testing, Nutrition and Psychotherapy in the Treatment of Bipolar Depression