What is Genetic Testing, and How Can It Improve My Mental Health?

Genetic testing is the future of psychiatric care. By helping to determine your unique genetic makeup, genetic testing can lead to targeted mental health treatments suited to your unique needs, improving your overall quality of life faster than the trial-and-error approach. This blog will cover the following:

What is genetic testing? William's story

When William* came into my office for the first time, I asked him, like any other new patient, “What brings you in to see me today?” He just looked at me and said, “I feel good. But I’m not well.”

At 52 years old, William was not new to seeking psychiatric help. He suffered from longstanding attention problems and insomnia that affected every aspect of his daily routine.   He had been taking a stimulant and anti-anxiety medication for over a year to treat these issues, and yet here he was in front of me. Why weren’t the medications working?

Like so many patients, he had fallen into the trap of conventional mental health treatment–you feel depressed or anxious so you go to a mental health practitioner for therapy, medication or both; the treating physician does a history but probably doesn’t ask for any lab results or request to do a new full workup; you are put on one medication at a low dose for a few months that your doctor slowly increases, and when that doesn’t work, you are put on a different one, or two at the same time, and that period of trial and error continues without much relief from your symptoms. Not only that, but you get side effects such as weight gain and irritability.

If that sounds familiar to you, then you are not alone. About 30-40% of new patients who come to see our doctors report that they are not doing well on their current medication regimen and want a second opinion. This trial and error process is a necessary part of treating any psychiatric problem, but what if you could reduce the pool of 38 different anti-depressants your physician has to choose from down to 10? What if you could more reliably predict which medications would be effective in treating your symptoms? What if you could determine how quickly you metabolize certain medications or whether your body is resistant to a drug before you even try it? What if you could significantly reduce the risk of side effects like suicidal thoughts? What if you could also reduce the costs that you would incur trying multiple medications over a longer period of time?

This is all possible now with genetic testing, an exciting new technology in the field of Precision Medicine.

I told William that we needed to attack this plateau in his treatment with more innovation, and ordered a genetic assessment. All William had to do was get his cheek swabbed. His results came back 3-5 days later and revealed that he was a poor responder to several different Selective Serotonin Reuptake Inhibitors, or SSRIs (the most commonly prescribed class of antidepressants), including those that he had been placed on the past year. We put him on a tricyclic antidepressant based on his tests, and after a few months, his symptoms improved 80-85%. The medication allowed him to begin processing the grief that he was feeling for his mother’s growing dementia, the emotional side of his depression which he had put in the background while his physical symptoms dominated. Now he was in control of the direction that his treatment would take.

"How does genetic testing help my mental health?"

We have all heard about the rise in at-home, direct-to-consumer genetic testing by companies such as 23andMe. But what you haven’t been hearing much about from your psychiatrist is genetic testing targeted to your specific mental or emotional health issue. This is called Pharmacogenomics, originally developed by the Mayo Clinic and Cincinnati Children’s Hospital in 2013 with Assurex Health.

Identifying certain genetic markers, called pharmacogenetic markers, in a patient can shed light on whether particular psychiatric drugs will be effective and whether there is a higher risk of adverse events from those drugs for that individual. Psychiatrists can tailor their treatment plan to each patient based on his or her pharmacogenetic markers, which include genetic mutations that predict alterations in how the underlying neurons and synapses (brain cells and their connections) function, and the rate that a patient metabolizes medications, to help avoid issues such as lack of effectiveness, drug-resistance and drug interactions. It’s a more objective, evidence-based guidance system to help doctors select the right medication for their patients.

Our practice works with a company called Genomind, which is a leader in this type of precision medicine that focuses on treating the individual rather than a population. They developed a genetic test called the Genecept Assay® that uses a patented algorithm based on hundreds of studies to interpret a patient’s test results, which doctors use to help decide the most appropriate class and dose of medication for each patient. In a recent study, clinicians reported that 87 percent of their patients showed improvement with treatment guided by the Genecept Assay®. They also reported improvement in 91 percent of patients who had failed at least two medications in the past. In February of this year, the federal government made veterans and active military personnel eligible to receive the Genecept Assay® as part of their treatment plan. The government capitalized on this technology in 2014 when Medicare and the U.S. Department of Veterans Affairs approved Assurex Health’s test called GeneSight™. This is a trend that is only growing.

Who is a candidate for genetic testing, and what is the procedure?

Genetic testing is not just for people like William who have battled a nonresponsive medical regimen–it can help people who are new to treatment determine in a more rapid and targeted fashion what medication and dosage is right for them, possibly avoiding the roller coaster ride of medication resistance or a plateau in symptom relief down the road. Genetic testing addresses a variety of disorders apart from depression, anxiety and Bipolar Disorder, such as: Attention Deficit Hyperactivity Disorder (ADHD), Post -Traumatic Stress Disorder (PTSD), Schizophrenia, Obsessive-Compulsive Disorder (OCD), autism, chronic pain and substance abuse.

You can be tested in your doctor’s office by taking a swab on the inside of your cheek, which is completely painless. The results usually takes 3 to 5 days to process. Genomind accepts all commercial insurance, Medicare, and most Medicaid plans, and works with patients based on their financial needs to make the test affordable.

A candidate must understand the risks of basing a treatment plan in part on the results of genetic testing. This technology does not fully replace the trial and error process, and results are not always straightforward. Disclosure of a genetic finding that reveals a major health issue also could have emotional consequences for a patient with an existing psychological fragility, but the benefit of being able to see several steps ahead using information from your personal neurobiological profile outweighs those risks.

What is the evidence that genetic testing is effective?

Like any breakthrough, genetic testing in psychiatry is not without its controversy. The Boston Globe published an article in October of 2015 on the reliability of these new tests, focusing on an investigation conducted by the New England Center for Investigative Reporting (NECIR). NECIR examined studies conducted to determine the efficacy of genetic testing in treating depression and anxiety, and called into question the validity of results, because in many cases the studies were funded by the very companies that administer the genetic tests.

This poses a potential conflict of interest that can’t be ignored. Scientists have called for more large population-based studies to gather a larger pool of data, first to have an independent evaluation of genetic testing as a tool to treat mental illness, and second to help clinicians measure individual testing results against more established findings. Dr. Robert Klitzman, professor of psychiatry and director of the Bioethics Masters and Online Certificate and Course Programs at Columbia University, reminds doctors using genetic testing in their practice that life circumstances, and interpersonal and environmental interactions can shape many mental health conditions, not just a patient’s genetic traits.

It is important to understand that genetic testing is one of many possible interventions that guide diagnosis and treatment of psychiatric conditions; other lifestyle choices, such as your diet and any other medications you are taking, contribute to the effectiveness of antidepressants, antipsychotics and other psychiatric drugs. This is why a psychiatrist must still take a thorough history and use traditional clinical diagnostics in combination with genetic testing to evaluate and treat each patient.

Despite the criticism that genetic testing in psychiatry needs more regulation and research, psychiatrists do have access to published guidelines for use of pharmacogenetic testing and their effectiveness. The Center for Disease Control and Prevention (CDC) has developed a model for evaluating these tests based on analytical validity, clinical validity, clinical use, and the ethical implications. Further, the Food and Drug Administration (FDA) has started to recommend genetic testing for specific psychiatric drugs and even include information about pharmacogenetics on drug labels. An organization called the International Society of Psychiatric Genetics is one of many that monitors the ethical implications of this treatment intervention.

Genetic Testing is the Future of Mental Health

The New York Times has reported that researchers for the first time can trace the onset of schizophrenia to a person’s genetics. Scientists from Harvard Medical School, Boston Children’s Hospital and the Broad Institute found that a variant in a particular gene affects a process during adolescence where the brain sheds weak or redundant neural connections as the individual matures. Those who have overactive forms of the gene shed those neurons too quickly are more prone to schizophrenia. Although this finding is not enough to test the general population, testing for this gene in young people who already show early signs of the disorder could direct the course of their treatment in a potentially life-altering way.

This is just the beginning of a revolution in psychiatric medicine. We are going to see breakthroughs that will shatter the status quo. Stephen M. Stahl, MD, PhD, Professor of Psychiatry University of California, San Diego (UCSD) said, “Psychiatrists and mental health professionals have long practiced personalized medicine, individualizing complex combinations of treatment for their patients. We are now on the brink of a new era where genomics such as through the Genecept Assay® can be added to the tools they use to select treatment options with the best chance of tolerability and efficacy.” In a video that Dr. Stahl posted as part of the American Psychiatric Association 168th Annual Meeting in 2015, he says that psychiatrists should embrace genetic testing and be early adopters, because a person’s genome will never change, but the science behind how we interpret a person’s genome will only become more advanced.

Every practitioner should be aware of this technology and offer it as a treatment option to his or her patients. If your doctor has not recommended it to you or your loved ones yet, you should take the initiative and ask about it. You don’t want to waste precious time living in a limbo where you are stable but not really getting better, when the answer could be just a cheek swab away. 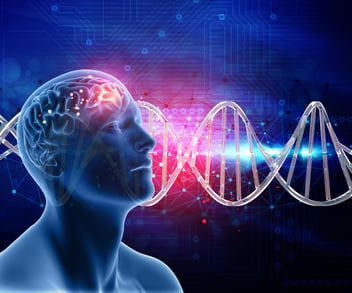 Can Your Genetic Code Shape Your Mental Health Destiny?