Reader, have you ever had an experience that made you re-think your fundamental identity? Events like this—sometimes called identity crises—can be extremely difficult to handle as we find ourselves doubting the person we thought we were… and fearing the new person we must be. When Bob* first came to see me, I could tell that he was shaken to the core. In addition to raising two teenage boys, he’d served as a pastoral counselor for years—that’s who he was, and that’s how others saw him. But recently, his depression had him thinking otherwise. “Doc, I’m worried I may no longer be effective with my clients because of my own mental turmoil,” he said. “My depression has recently left me with a constant fear of saying something wrong—saying something that will make them worse… or even cause one of them to take their lives!” At this stage Bob had already tried multiple medications, but found none of them to be completely effective. He was not only frustrated but terrified—would he ever be able to return to his “old self” again? Or was this dark cloud of depression destined to hang over his life—and his career—for good? Bob came in to see me for a second opinion, and as we reviewed his condition and his history, I told him the same message I want to tell you now: Reader, when it comes to depression, it’s not just the “psychological you…” it’s also your brain. And fortunately, your brain health and functionality can be modified with the right prescription and over-the-counter medications and supplements.

Bob had been on two different SSRIs and one SNRI prior to seeing me. He had done somewhat better on Lexapro (escitalopram) but it was discontinued as he had only partially responded to it. When it comes to antidepressants and other types of medications, finding the right solution can feel like an unsolvable puzzle. But genetic testing has given us a crucial key by giving us insights into how someone’s genome is impacting their mental health. We performed a Genecept Assay on Bob and found out why the Lexapro was not more successful. He had an SLC6A4 gene variant that predicted a good response to an SSRI— however, he had high levels of two liver enzymes, CYP2D6 and CYP2C19, that metabolized (and therefore deactivated) his Lexapro very rapidly. Bob would benefit by being placed back on an SSRI—he simply needed higher doses than the average patient to respond. With that in mind, we placed him back on Lexapro and increased it up to 50 mg daily. After several weeks, Bob reported that he was about 70% better—considerably better than when he had been on the (typical) 20 mg. dosage.

But returning Bob to 70% of his “old self” wasn’t good enough. We both wanted him to become whole by achieving full remission. I knew we could do it—but the question was, how? I returned to the results of his Genecept Assay to find my answer—and the clue was in his BDNF genetic variant. Bob had a so-called “Met/Met” variant which led to much lower BDNF production in his brain cells. Why is that important?  These pictures will illustrate why:

In this first picture we see that low BDNF causes abnormalities in glial cells, neurons, and mitochondrial energy production, thus leading to abnormalities in thinking and emotional regulation. 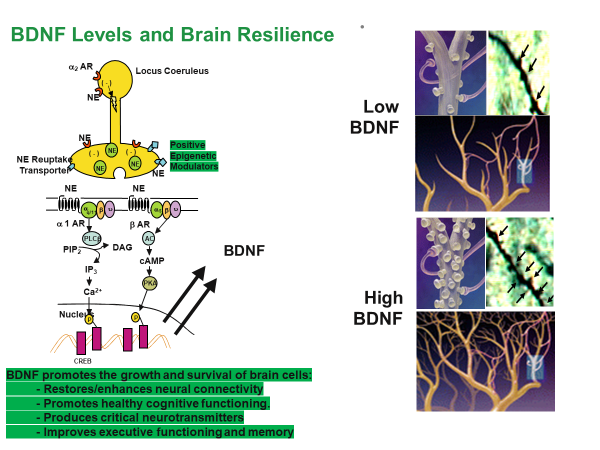 In this second picture, look at how higher levels of BDNF “fertilized” the axons and dendrites in the right hand side – the pictures point toward higher levels of neurotransmitters (the little “buds” on the branches) and more “connections” between brain cells (the “branches” of the trees are more abundant).

In my practice, I believe it’s crucial to build out a holistic health improvement program for my patients to help them return to their full selves and their full lives—and that includes both prescription and non-prescription interventions. Now, it’s widely accepted in scientific literature that exercise plays a direct role in increasing an individual’s BDNF, and that’s exactly what I “prescribed” to Bob. Armed with this genetic information, Bob began daily cardio exercise for 20 – 30 minutes (that’s right—it doesn’t take too much to see a huge difference in your brain functioning!) Four weeks later he returned, saying to me, “Doc, it’s amazing, I am back to 90% better! How do I hit 100%?” Knowing that lithium is known to increase BDNF, I added microdose Lithium to Bob’s regimen. Like exercise, it doesn’t take much lithium to make a difference. And sure enough, after a month on 300 micrograms daily—which is 1/1000th the initial dose of prescription Lithium—Bob had some good news to report. When I greeted Bob in the waiting room, his ear-to-ear grin said it all: he had achieved full remission! In our session he wept with tears of joy. I said to him, “Bob, you made my week, and it’s only Monday!”

Reader, the bottom line is this:  you do not need to live with your depression forever. Your brain function (mood, anxiety levels, cognition, behavior) is regulated by a genetic riddle, and the genetic test enables you to “reverse engineer” that riddle to help you and your doctor in the path towards full recovery.

“Depression” doesn’t exist. There are many “Depressions”—and genetic testing can uncover their secrets.

Supplements and Probiotics: A Prescription Pad Isn’t The Only Tool In Your Doctor’s Bag for Anxiety and Depression Treatment